During the quarantine, I became pretty interested in how we can automate reverse engineering, and decided to commit some time to implement a platform that can help automatically reverse and assess Python-compile executables, called boa. boa helps security researchers extrapolate original and readable Python source from compiled and packed executables, and runs automated security checks to detect for low-hanging bugs, leaked secrets, etc.

This tool is still being developed, and I hope to write a lot more about the different refactors that is to be introduced over time, including techniques in how we approach opcode de-obfuscation, bytecode dumping, etc. Consider this a first in a series of posts about Python reversing!

For hackers and reverse engineers, the routinization of processes and workflows that is often undertaken when manually disassembling applications may be strenuous, and given our experience and ability to persist, our results may not often be precise. This, as a result, often encumbers the work done needed to gain visibility into a program or process, needing more time to inquire and quantify about the target.

Python is a language that we all know and love, with one big reason being it’s ability to be executed generally agnostically, as long as an interpreter exists on the host platform. Therefore, applications and even malwares (check out SeaDuke, a sample found in the DNC hack) have been adopting capabilities to pack their code and resources with an interpreter into a final executable for a given platform.

When a developer wants to take an application that they’ve written into an executable format and distribute it, Python supports a unique bootstrapping process, where a setup script takes the lead, and provisions a compressed file with a portable Python interpreter, bytecode, and any other resources. The “freezing” algorithm that enforces this depends on the packer/installer being used, and there do exist several out there today.

boa provides unpacking support to multiple packers, and we’ll take a quick peek at PyInstaller, probably the most commonly used packer for cross-platform applications. Others exists like Py2exe (which is, simply put, a zip file), and cxfreeze and bbfreeze.

PyInstaller freezes the compiled bytecode files (or bundled .eggs) generated from source, including both external and standard library dependencies, converting them into Python archives (.pyz files) and injects them together into a final executable, with TOC (table of contents) objects acting as a headers to those locations. Once the executable is run, the environment is setup such that the external dependencies are recovered and loaded into sys.path using import hooks, and the functionality implemented at the entry point is run.

The CPython runtime interprets original source code, but rather than spitting out optimized native machine code, it generates its own intermediate bytecode format, which is easier to concisely recover a source code. Notice the disassembled bytecode in he following snippet, and its stack-based and reduced instruction set:

Given such a simple instruction set and a constrained runtime, it is no surprise that the tooling for decompiling bytecode files is very precise. The most commonly used decompiler for bytecode today is uncompyle6, which has been well-maintained for most Python versions. Here it is in action decompiling sample source code. Notice that unlike most of the decompilers we work with that only approximate behavior, uncomplye6 is able to fully recover all syntax, even the comment annotations themselves: 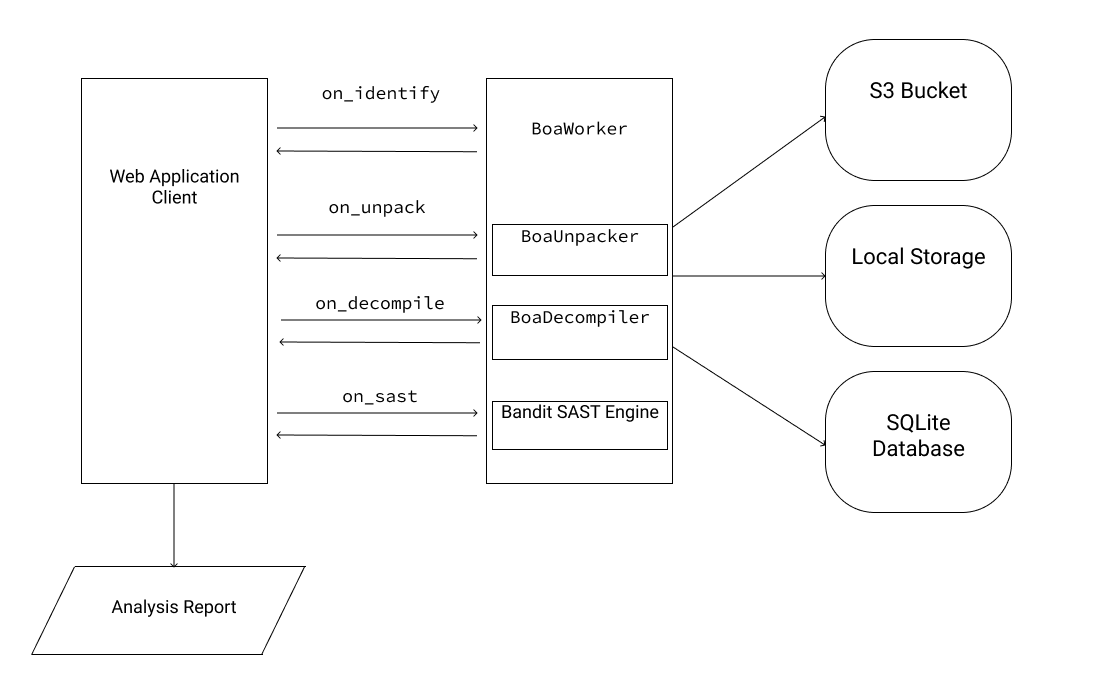 At this stage, the analysis is complete, and we want to store the information recovered from this process. boa zips the workspace directory that it has been working with serverside, and uploads it to an AWS S3 bucket. The URL to the object, and any global metadata (i.e updated total number of sources files recovered, issues found, etc.) will be updated to a SQLite database, which is used to retrieve the entry per analysis result in order to generate a report for the user when requested.